A recap...of the whole country!

Hola amigos!! Here I am on the other side of the country in Golden, BC. The last time I wrote a blog post was when I left Nova Scotia...clearly it's been a good tour, as I've barely had time to write anything in the interim!!

John and I had a most fantastic trek across the country - playing shows in West Dublin (followed by an epic sausage cook-off), Montreal, Toronto, Hamilton, Calgary and Chase. We were ravaged by bugs in North Ontario, swam in a McCain fries tailings pond in Manitoba, just to beat the heat, and we ate horrible gas station burgers in Saskatchewan. After we played in Calgary, we stopped in Canmore on a whim, only to end up playing the locals open mic, where we were very well received! Special thanks to Holly the bartender for letting us crash at her pad! We really didn't know where we were going to stay that night... After our most gorgeous show in Chase, I dropped John off outside Kamloops, where he hitchhiked back to Victoria to visit his Point Street House friends. I then made my way north to Prince George, where I was playing a house show for my friend Rob Prideaux, who generously donated to my album fundraiser to have me come up and play a house concert! Thanks Rob for all of your support - a true patron of the arts! 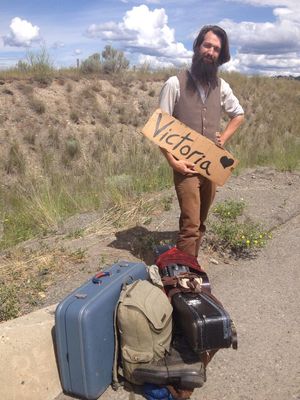 Bye bye John!! You were a hilarious and amazing tour partner!!!

Thus ended the 'pre-tour tour' as I called it, because I then reunited with my friends from Compassion Gorilla for our month long tour of BC. We played a fun outdoor show in Williams Lake before heading west to Bella Coola. The road to Bella Coola (nicknamed the Freedom Highway) was certainly the most harrowing road I have ever driven. Basically, you drop 4000ft in about 20km on a small dirt road barely big enough to fit two cars. On one side of you is an avalanche waiting to happen, on the other side is a massive drop off. But then you emerge next to the river and voila - surrounded by epic and majestic mountains on all sides. What a beautiful setting for a music festival. Special thanks to my friend Kenan (from High Society) for being a great co-pilot and teaching me how to use my low and 2nd gears properly We had a great time at the festival - jamming with some fantastic musicians, playing the after party, and...hanging out with Fred Penner backstage all weekend!! I don't really know what Fred was doing in Bella Coola, but it was pretty cool to meet a childhood hero and get to do some emceeing with him and watch him play some amazing music. After the festival, I had a few days off until the next festival, so I visited my friend Wild Mike at his grizzly guiding lodge in the valley, where I learned the history of the land and the fishing habits of the bears. Then it was off to Hootstock, a wild festival put on by my friends Astrid and Steve in the middle of the woods near 100 Mile House. It was so wonderful to see so many of my BC musician friends again and meet some new friends as well! Amazing music and food all weekend with a lot of great jams in between. 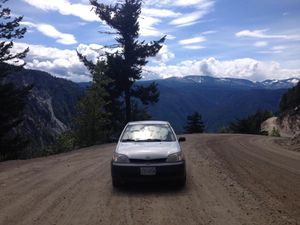 Can you believe the Clamshell survived the Freedom Highway?? 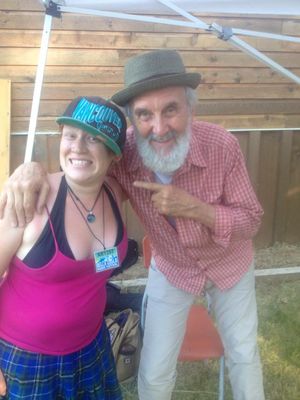 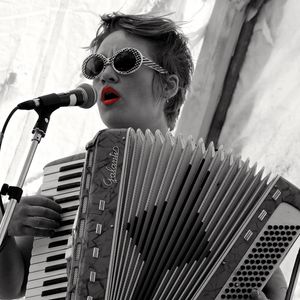 Then it was back to the coast for me, for a few days at my parents' house on Mayne Island. I saw some old friends, ate my parents' food and had some great swims at Campbell Bay and off the Miner's Bay Dock. John and I were reunited for a day, where we played a show at Point Street House to all our Victoria friends. Then a great series of island shows (Mayne, Pender, Salt Spring, Chemainus) before heading back to the interior. Compassion Gorilla has since been joined by two sexy Argentinian musicians from the clown band Entangados, introduced to us by our trombone player Dan, who met these cats in Mexico this past winter! It's been so great playing with Fede and Ariel and learning more about music from them. Our best show was probably the Wapiti Festival after-party in Fernie, a wild audience as always!!
We just spent a few days of rest in the mountains near Golden and here we are, using the internet before heading back into the mountains and then to Robson Valley Music Festival. 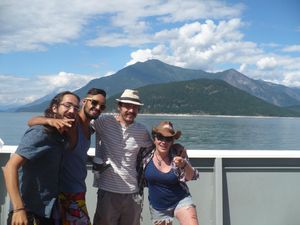 Compassion Gorilla horn section with Fede (bass) and Ariel (accordion) from Entangados!! On the ferry across Kootenay Lake.

After Robson, I will be returning to the east coast, playing shows along the way. And I am pleased to announce that Ariel (from Entangados) will be my touring and musical partner for this batch of shows. I'm excited to show him Canada and help him with his English (which is already quite good) and also get better at my Spanish,,,Mortal Culiau!!!! 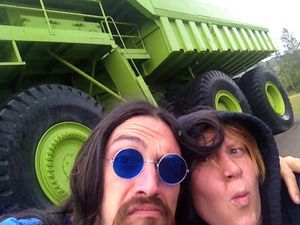 And so I'll leave you with our upcoming tour schedule back to Halifax - hope to see you down the road, Clamfolks!!

And then we will sleep...